PT. JOYDEEP  GHOSH,
Sangit Kriya Visarad (Gold Medalist), Sangit Praveen (Gold Medalist)
Pt. JOYDEEP  GHOSH  is  hailed  as  one  of  India’s  leading   Sarod , Surshringar &  Mohanveena  artists , today .
He  started  learning  Sarod  from  the  tender  age  of  five  under  the  able  guidance  of  the  great  masters  late  Sangeetacharya Anil Roychoudhury , late Sangeetacharya Radhika Mohan Moitra  and  Padmabhusan Acharya Buddhadev Dasgupta  all  belong  to  the  famous  Shahajahanpur Sarod Gharana . He  has  learned  the  technique  of  Laykari  and  its  application  from  the  noted  exponents  of  Tabla late  Pt. Amal  Sarkar, late  Ustad  Shaukat  Ali  Khan  and  late  Pt. Anil Palit . He  has  also  received  his  lesson  in  Vocal Music  from  the  eminent  vocalist  late  Sangeetacharya  Amaresh Chandra Choudhury  belongs  to  the  famous  Senia  Gharana . Subsequently, he  was  under  the  tutelage  of  the  versatile  master  late  Pt. Bimalendu  Mukherjee , a  doyen  of  the famous  Imdadkhani  Gharana  of  Sitar  &  Surbahar .  Pt. Ghosh  has  included  all  the  important  aspects  like  Gayaki , Tantrakari, Raag-vistar and Laykari in his own style .  The  brilliant  guidance  under  the  famous  maestros  has  led  him  towards  a  new  horizon  in  Sarod , Surshringar  &   Mohanveena  playing .
The  artist  had  received  many  awards  &  honors  since  his  childhood  including  the  Scholarship  &  Fellowship  both from  Govt . of  India .  All along  he  had  secured  1st  position  in  All  India  Music  Competition(Delhi) , 'Sangit  Kriya Visarad' Diploma (Kolkata)  &  'Sangit  Praveen' Diploma (Allahabad) . He  had  been  awarded  the  title 'Surmani' by  Sur Singar Samsad (Mumbai), 'Swarshree' from  Swarankur (Mumbai)  and  ‘Top Grade’  by  All India Radio .
The  artist  had  been  invited  to  perform  in  several  esteemed  music  festivals  throughout  the  country  and  has  also   enchanted  music  audience  of  different  countries  including  USA , UK , Germany , France , Holland , Norway,  Sweden , Denmark , Bahrain , Bhutan  etc . In 2010, he was invited to perform Surshringar in various festivals  arranged by some reputed organisers of USA.In 2012, again he had been invited for his Surshringar performance by 'Darbar' & 'Milapfest',the leading organisations in UK.The audience of  both the countries had  witnessed the instrument for the first time on stage.
Pt. Ghosh was attached as an Associate Professor with Indira Kala Sangit University, Khairagarh (Chhattisgarh) between 1985 - 2013 . 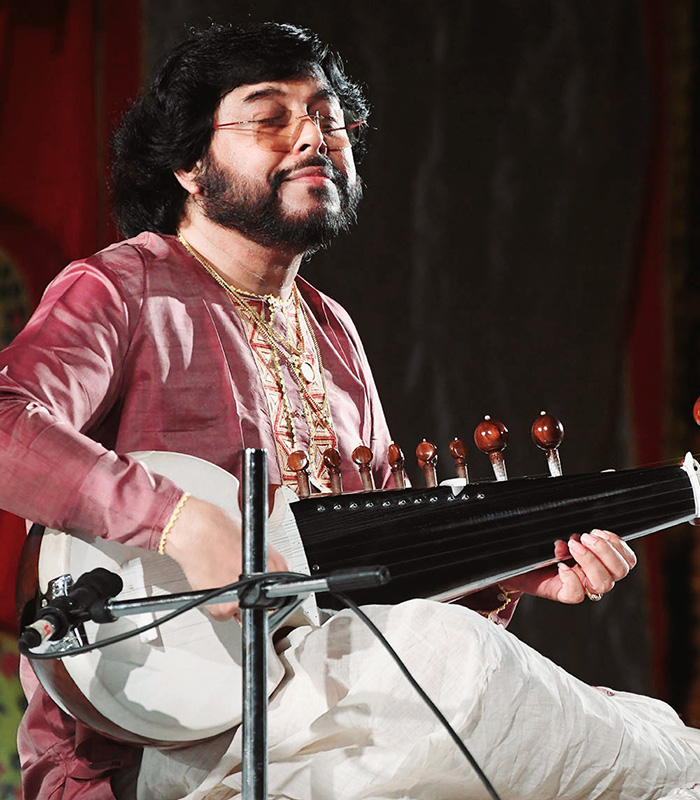